Dead Cells is a Roguelite-Metroidvania game developed by Motion Twin, a French studio. You play as an Undead-beheaded-cloudy kind of character and you have to get out of a procedurally generated dungeon using weapons and items spread across it. Every item you unlocked during a run can be found again on the next try.
This is a Roguelite, a lot like Rogue Legacy where each time you play, the game randomly generates a new playing field. This is also a Metroidvania because you have to unlock new skills to be able to access new areas on the next try.

In this article, I will explain some of the elements that make Dead Cells a really well-crafted game and some details that could be improved 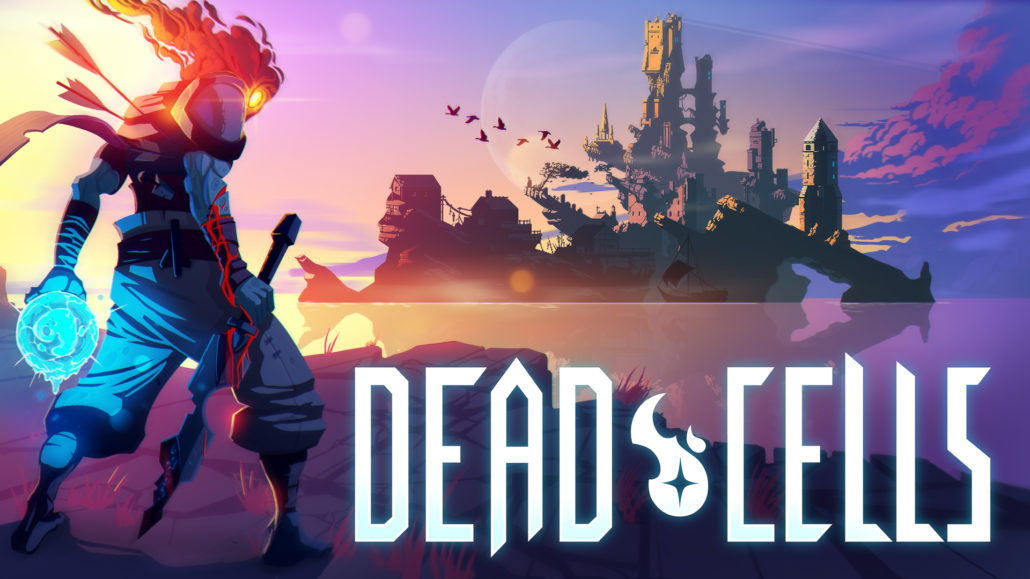 Dead Cells is available on every platform since August 7 2018, and I reviewed it in September 2018.

The mandatory tutorial when you play the game for the first time is nicely done, every basic movement and interaction options are explained in a quick series of rooms with minimal indications. 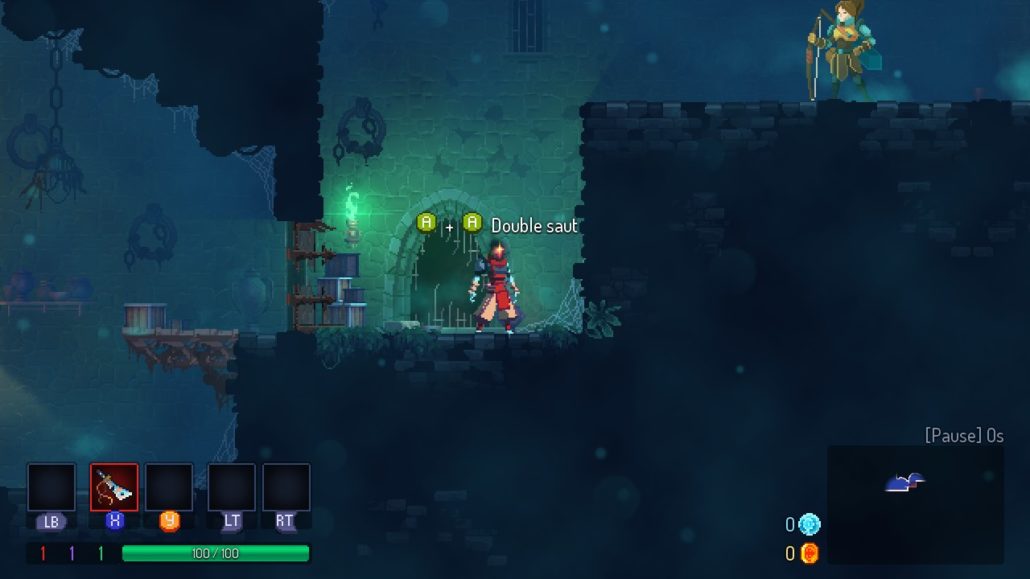 “I think I need to use the A button two times …”

After that, every time the player encounters a new core mechanic, the game forces him to use it at least once in a “controlled environment” so he can experiment how it works before trying it in the rest of the levels. 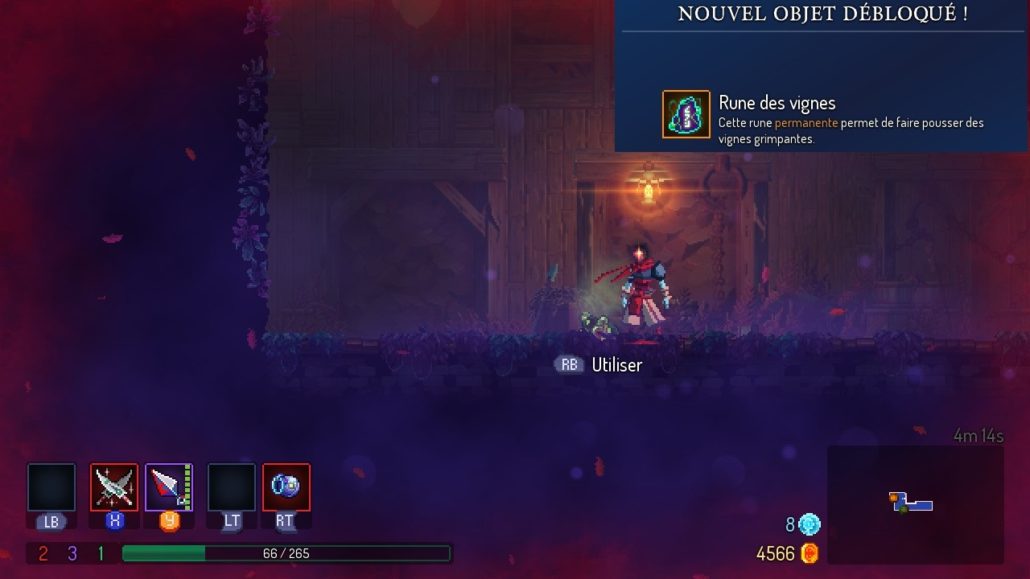 “Nowhere else to go, and I just go the exact item I needed to use this, how convenient :)”

It is an efficient way to introduce the player to how the game works without having him sit through extended explanations of everything he can do in the game.

Something still misses to help the player really understand what happens : a “recap death screen”, there is currently only a short slow motion when the character takes the last hit and sometimes it can be in the middle of an epic fight with a lot of things happening.

A reminder of which enemy killed him or a mean to watch the scene in slow motion could help a lot and maybe add a layer of preparation in the player’s experience : “Okay this is the third time that this bomber thingie kills me, maybe I can try to attack it from afar first to weaken him”.

Example of a death replay in Towerfall 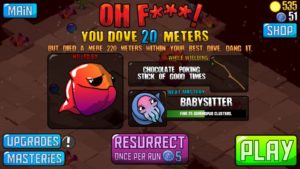 Example of a death recap screen in Quadropus Rampage

Every basic game element needed to progress in the game is explained the first time it is encountered.
This makes Dead Cells exceptionally easy to understand. I even tried to give the controller to a “non-gamer” (For the sake of anonymity, i’ll call him “Mom”) and everything was entirely understood very quickly … Well, not entirely … One small indomitable part of the game still holds out against Mom. 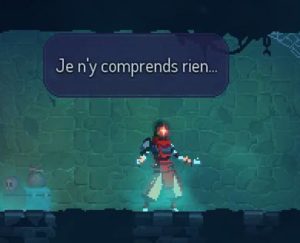 “Jumping while crouching makes the character pass through platforms”.
This is a standard for a lot of platformers and it is explained in Dead Cells, but only once. The controls are displayed every time the character is on a platform until the player does it once. But it is not required to finish the very few rooms of the tutorial. This means that, as the levels are procedurally generated, the player could finish some levels without having to pass through a platform. He could then use the button combination on a platform without realizing what it did or that the help would then disappear forever, and then, encounter a platform that needs to be passed through to finish the level.
This is very picky, like, no chance this could happen am I right ? … Well, guess what Mom did?

And this could easily be solved by making the first encountered platform in the tutorial a “must pass through platform”. The players would have to do this action in a situation where nothing else would work, and it wouldn’t take much longer to finish the tutorial 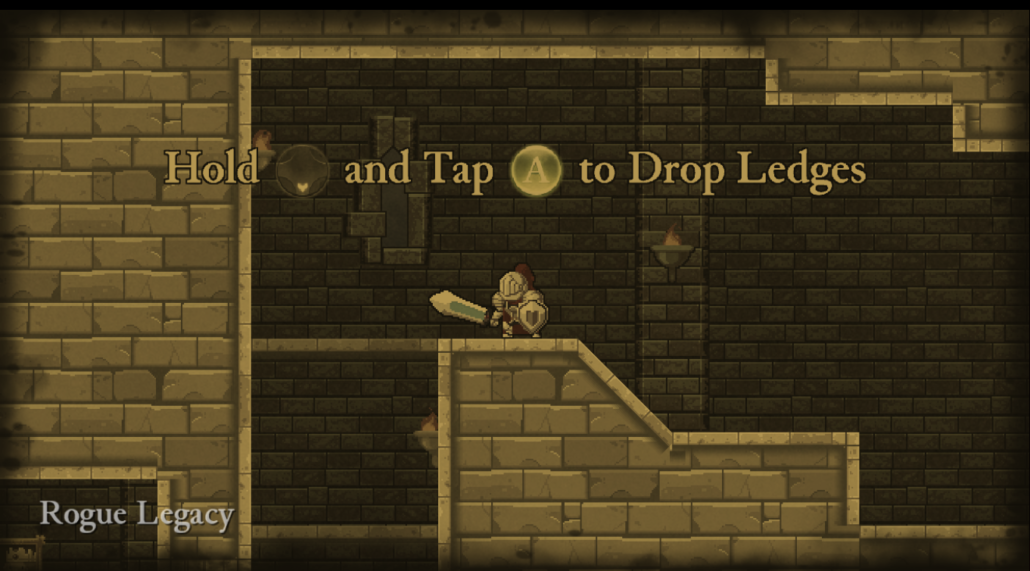 In Rogue Legacy, this is explained in the tutorial part

But yeah, this is a tiny detail, I really didn’t have a lot to criticize!

Just play, you will figure it out later

The game allows the player to tackle any situation with very different strategies. He can play it slow and strategic with traps and bows, or totally aggressive with big swords and explosive grenades. 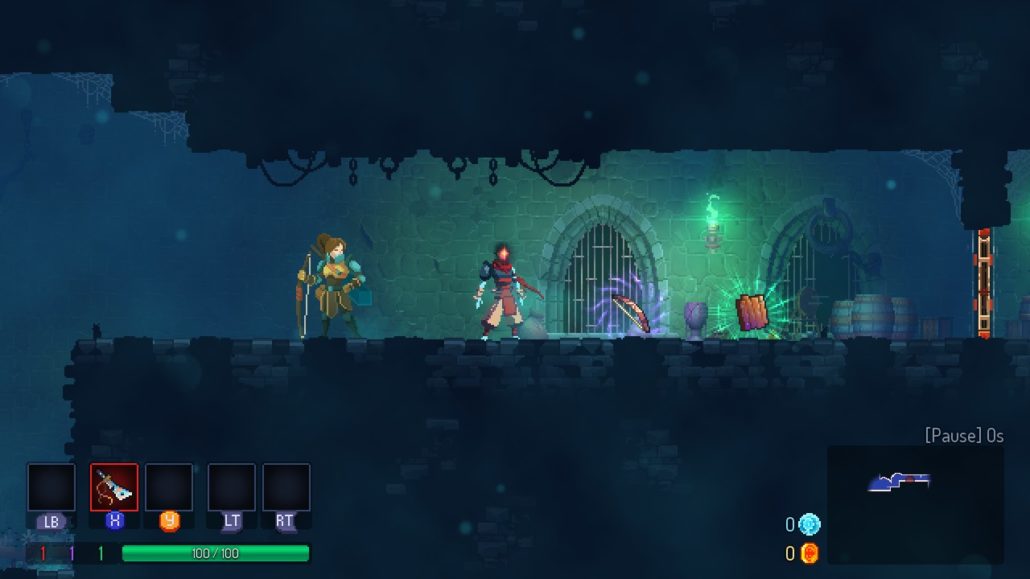 Even at the very beginning, I can choose between a bow and a shield

These possibilities help the player understand what is happening and makes him feel that the situation is in his control instead of feeling that he has to react as a developer intended him to. And this “feeling of freedom” is a major feature for the replayability of the game. The player is free to try a lot of different strategies and items and the game encourages him to unlock everything.

To progress in Dead Cells, the player has to discover “runes”, new abilities to interact with special elements of the levels. These elements are interactives whether the player has the rune or not.

This helps to prick the player’s curiosity and encourage him to continue to find the proper way to use these elements. 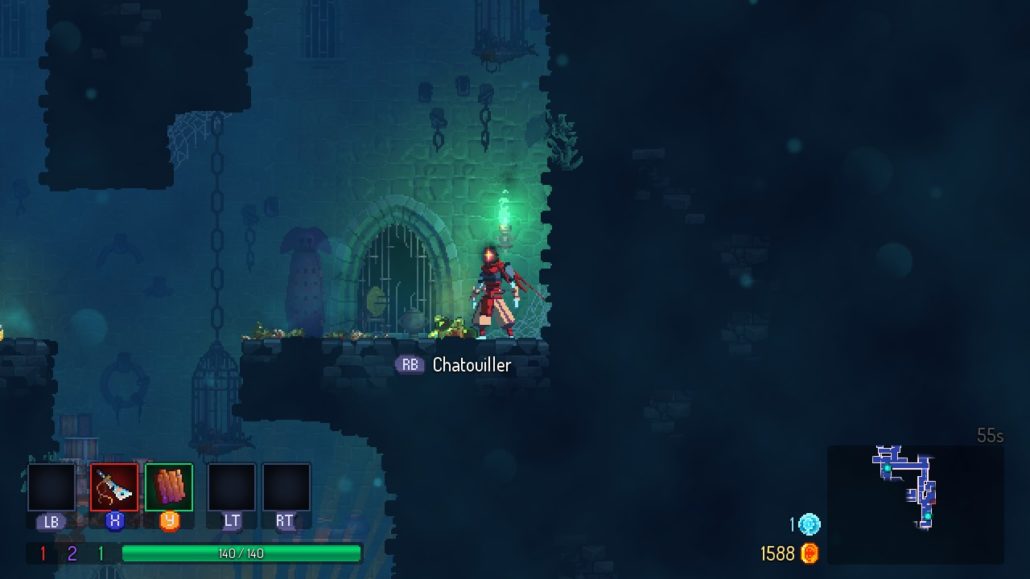 “Press RB to tickle” … “I hope there is something else I can do here, I’ll come back later”

The story is displayed by some scenes hidden in the levels, and each scene is a tiny clue about what happened in these monster filled lands. The character doesn’t seem to understand a lot of what is happening to and around him (it ?) and most of his (it’s ?) reactions reflect the player’s attitude when interacting with the game.

This is a smart way to help the player identify with his avatar. By anticipating the usual reactions of most players in front of a cryptic story (“What ? Ok let’s continue and hope to find more information later”) the game facilitates the “suspension of disbelief”. The character is in a strange world and doesn’t know how it works or why he (it ?) continues, but he (it ?) still does because why not. Likewise, the player has to discover everything, the difference with the character is that he does it because it is fun and he bought the game.

Dead Cells is very good, easy to learn, hard to complete and really fun in between! I had a lot of fun playing it and a lot of trouble finding problems in it. I focused this review on the learning and discovery part but I could write a lot more on this game about the well-handled accessibility options, the sensorimotor coherence, some pipe-shaped ladders that don’t look climbable, the pacing of the levels, the enemies AI and feedbacks and so on …

We can do a lot more thanks to our tools and expertise, see our tool presentation or contact us if you want to know more.
If you have questions or opinions, please tell us in the comments. See you next time!

That was Game U.R. the review ergo of jeux vidéo.