Cuphead is a run and gun action game developed by StudioMDHR. You play as “Cuphead” who just lost his soul to the devil and you have to fight bosses to get it back. The visuals and audio have the same look as 30s cartoons and are really nice to watch.
Cuphead has made itself known recently because of its difficulty, it has become an internet challenge to beat it and it started a large debate about why difficulty is good in games.
At LudoTIC, we wondered: How much of this difficulty came from the will of the designers and what part came from potential UX issues ?
Let’s see about this by breaking down some elements that makes the game feel difficult and how this could be handled :

Cuphead is available since the 29 September 2017 and we reviewed it mid-November 2017.

The difficulty is due to cognitive load

The main reason that makes the difficulty of Cuphead is the number of things on the screen that can kill the player (everything that moves except platforms). The game voluntarily imposes a lot of visual work on the brain, numerous lethal things to see and a very colorful background (You can see a video about cognitive load and its effects here). Adding to that is the fact that the player has just enough time to do the right moves to survive. The player has then to learn every event of the level to know when they happen and how to survive them, with only 3 errors allowed before having to restart the level. It goes without saying that, before all of this is mastered, he WILL fail A LOT. 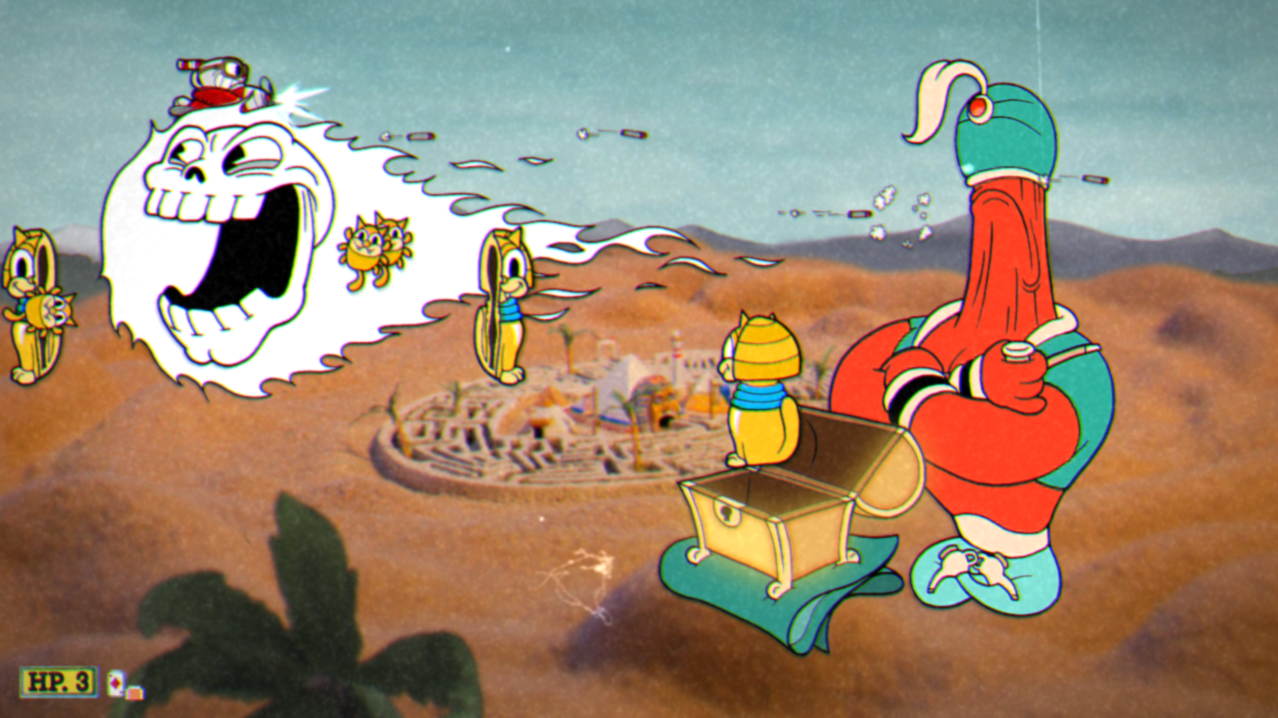 The amount and difficulty to learn of the lethal things ramps up really fast after the first world and some players could get fed up after trying a few times if they can’t figure out how to overcome what killed them. Most levels are mandatory to continue the game so failing to finish a level would be like “Not being able to finish the game because it doesn’t want me to!” and can be very frustrating.
On top of that, during boss fights, some events appear at random, it means that sometimes the player will win because an event didn’t occur, this can make the victory less satisfying because more dependent on the randomness of the event than on the player skill.

The frustration of the player is handled pretty good when he dies as we will talk later, but one other way to reassure the players on the difficulty could be to seem more transparent about what makes the game difficult and add a way to change it depending on the player. For example, adding options to ease the game, but every time the player uses one of them, his “difficulty level” (a vanity stamp on his screen) lowers. Also, when a fight has multiple possible events, making sure that every event occurs (even in a random order) can add a sense of fairness to the fights.

Example of options that could help players: 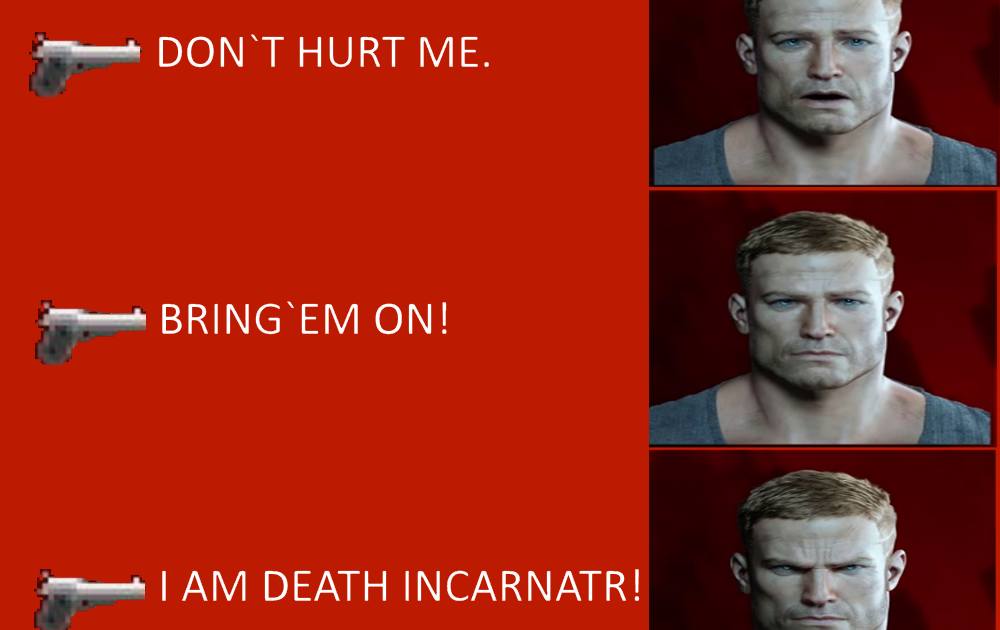 Difficulty as “vanity stamp” in Wolfenstein: The New Order

The game doesn’t care about me!

The game doesn’t acknowledge the player a lot. The rare things that makes the player feel noticed are enemies blinking when they are hit, the “phase change” animation of the bosses and some homing bullets. The only element that visually reacts when hit is the character himself, this makes him look weak and non-impactful in the middle of these really lively and moving levels. Every character looks “bouncy” because of the art but is like a blinking brick wall when shot and just poofs away when it dies (except the bosses).

This is a lot like “Shoot’em up” games, where the player feels like a tiny thing lost in a sea of murderous stuff and has to try to get out of it.

Ideally every enemy should have its “I’m hit” animation, but the blinking is enough most of the time, except for some yellow characters on which it can be hard to spot. The blinking could have been made in a different color from opponent’s color, or they could blink using negative colors (but it wouldn’t be a good solution for the bosses).

When failing, the player can go again very fast and easily. The game shows how far the player was in the level and most of the time, it is easy for him to understand why he failed. This gives him incentive to go again until completion.

One little usability problem during this cycle is that the player has to go back to the map to change his weapons and equipment, this can create a disruption in the speed of the restart when the player wants to try different loadouts and could easily be solved by allowing the “equip card” to be used on the losing screen. 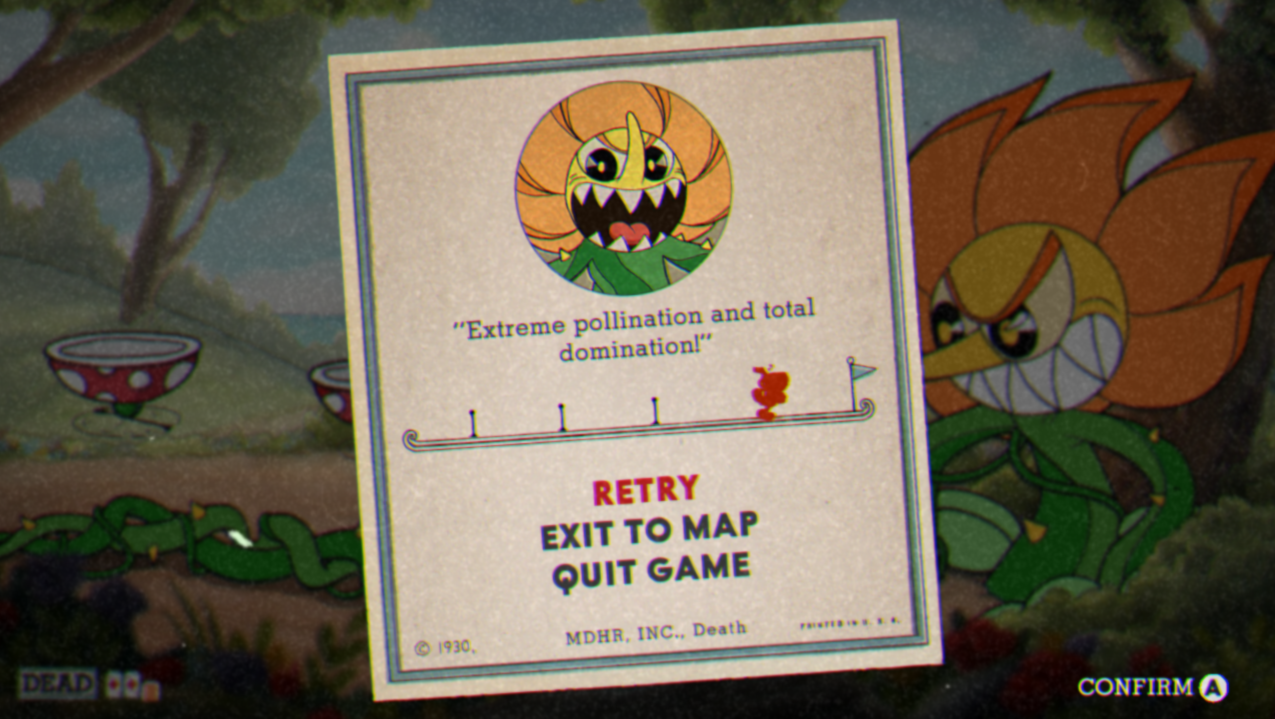 Cuphead is a great run and gun, very nice to watch and challenging to play. Yes, the game is difficult but we think that what makes people angry about it is something more than the difficulty itself. Part of that would be Cupheads way to laugh at the player’s failures and some missed menu and fairness optimization opportunities. 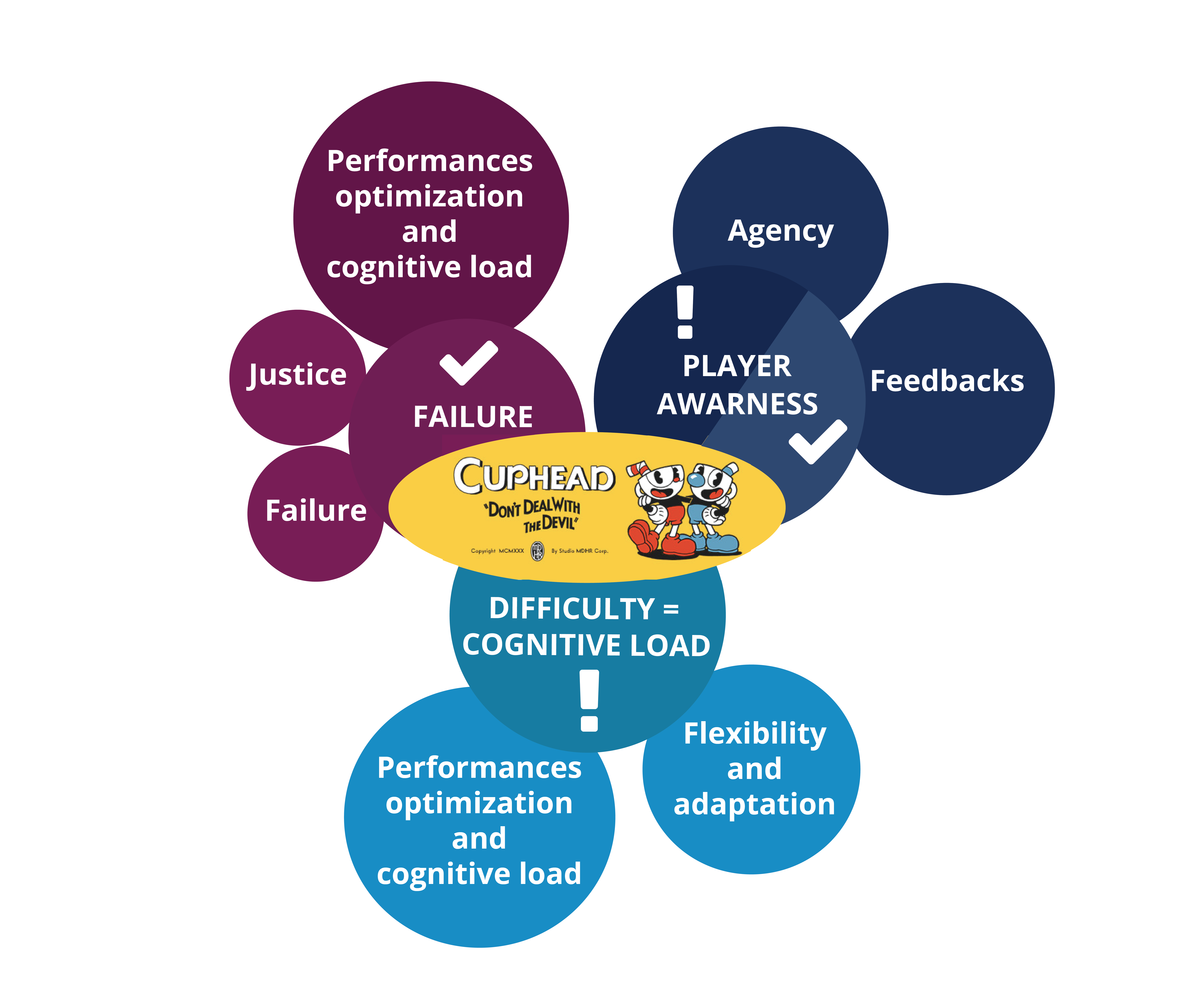 This review was but only a peek of our Cuphead assessment. We can do a lot more thanks to our tools and expertise, see our tool presentation here or contact us if you want to know more.
If you have questions or opinions, please tell us in the comments. See you next time!